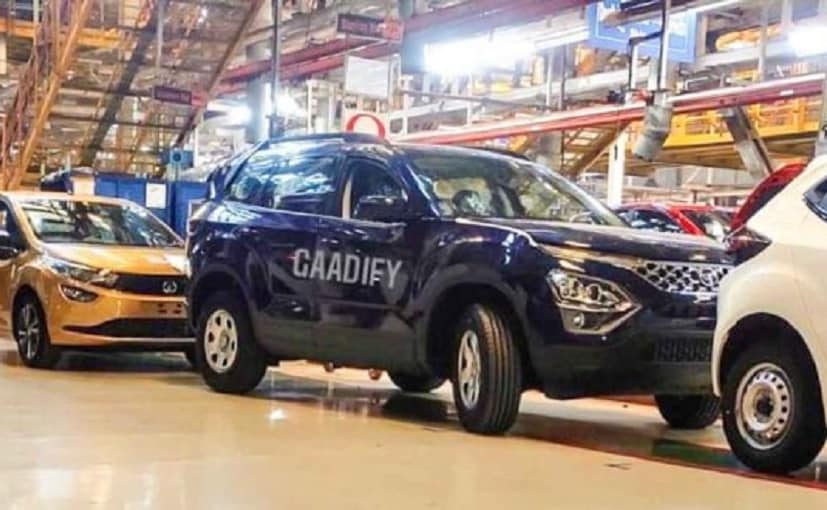 Tata Motors is all set to launch its new SUV, Tata Safari, in India in the coming weeks. Essentially the 7-seater version of the Tata Harrier, the pre-production concept was unveiled as the Gravitas, however, the company has now decided to revive the Safari moniker with the production version. Ahead of its official launch, which is expected to be around January end, images of the SUV have leaked from the company’s plant. In these new photos, we can see the new production-spec Tata Safari with a few other models, at the facility.

We already know that the carmaker has commenced production of the new Tata Safari, and the company has confirmed that it will reach showrooms in January 2021. The new Tata Safari SUV will be based on Tata Motors‘ OMEGARC (Optimal Modular Efficient Global Advanced Architecture) platform, which is derived from the Land Rover’s D8 platform. The SUV will also employ Tata’s impact 2.0 design philosophy, and it will be positioned at the top of its product portfolio.

Visually, the SUV will largely remain identical to the pre-production concept showcased at the 2020 Auto Expo, however, we will get to see some noticeable cosmetic changes. For instance, the production version will get a different grille with large honeycomb patter and chrome highlights. In fact, the company revealed the grille in its recent teaser. However, the sleek DRLs and indicator lights and the separately positioned large arrowhead headlamp cluster are similar to the Harrier. Here, the SUV appears to get LED projector lights. 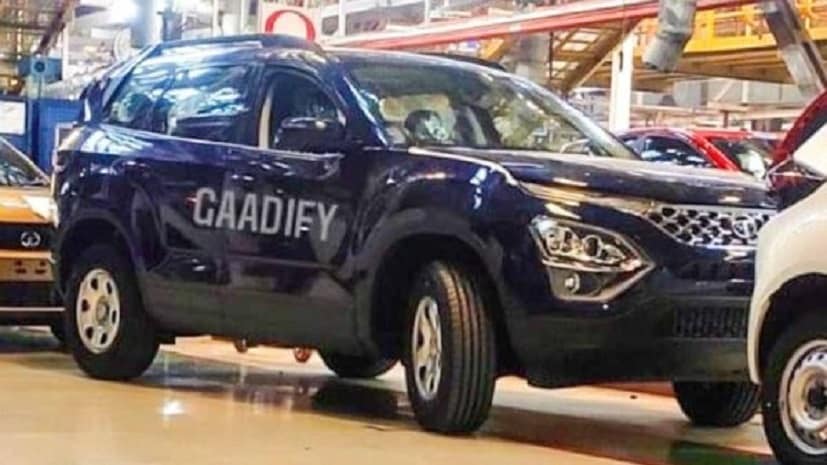 The standard black ORVM, the white steel wheels and the slim tyre indicate that this could be one of the lower-spec variants of the new Safari

We also get to see the Tata Safari in this new shade of dark blue, with large roof rails. That said, the standard black ORVM, the white steel wheels and the slim tyre indicate that this could be one of the lower-spec variants of the new Safari. The SUV is also seen with heavy cladding on the bumper, wheel arches and side underbody. On the inside, it could get the signature-style oak brown dual-tone dashboard, three-spoke steering wheel, an 8.8-inch floating infotainment system with Android Auto & Apple CarPlay, voice recognition, a 7-inch instrument panel, premium oak brown leather seat upholstery, JBL speakers, and more.

Under the hood, the 2021 Tata Safari SUV will be powered by the same BS6-compliant Fiat-sourced 2.0-litre, 4-cylinder diesel engine, which also powers the 5-seater Harrier SUV. The motor is capable of generating maximum power of 168 bhp against the peak torque of 350 Nm. It will be mated to a 6-speed manual gearbox along with an optional 6-speed automatic torque converter.

KTM Extends Service And Warranty Periods For Customers Till July 31, 2021

COVID-19 Night Curfew Extended For Another 3 Days In 36 Gujarat...

ReformerNews - May 18, 2021 0
<!-- -->Medical, paramedical and allied health services, oxygen production, distribution systems will continueAhmedabad: The night curfew in 36 cities of Gujarat, including nine...

Roy Hodgson To Step Down As Crystal Palace Manager At End...

COVID-19 Vaccination Survey: Pick Up If You Get a Call From...

ReformerNews - May 18, 2021 0
COVID-19 vaccination drive is in its third phase in India and people getting their shots are now receiving calls for a government...
© ReformerNews 2021. All Rights Reserved
Go to mobile version
%d bloggers like this: