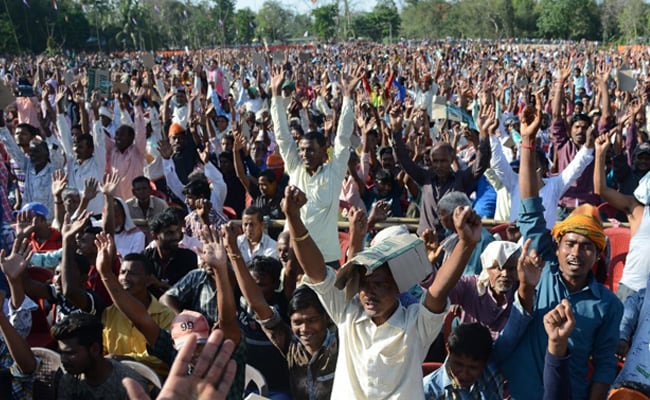 Five states – UP, Goa, Manipur, Uttarakhand, and Punjab – will vote between Feb 10 and March 7 (File)

The ban on rallies ahead of elections in five states – imposed by the Election Commission last week as Covid cases spiked – has been extended till January 22.

On January 8 the top poll body had said rallies, roadshows, and some other kinds of public political events would be banned till January 15 (today), and that the order would then be reviewed.

Today the Election Commission held a series of meetings – with the Union Health Secretary at 11 am, Chief and Health Secretaries of all poll-bound states at noon, and Chief Election Officers at 1 pm.

A final decision on holding campaign events will be taken after inputs from all those concerned – the centre, the state governments, health officials, and political parties – the Election Commission said.

The order banning rallies and roadshows was passed as part of a list of measures aimed at holding polls in Uttar Pradesh, Punjab, Goa, Uttarakhand, and Manipur as safely as possible.

Included in that list of ‘no-no’ activities were the holding of nukkad sabhas, or roadside meetings, and limiting the number of people allowed for door-to-door campaigning.

“Candidates should conduct campaign through virtual mode as much as possible… There will be no nukkad sabhas on public roads and no victory procession after counting,” Chief Election Commissioner Sushil Chandra said last week.

Elections in UP, Punjab, Goa, Manipur, and Uttarakhand are being held amid a frightening surge in Covid cases across the country, including in some of the poll-bound states.

UP reported a massive 1,300 per cent increase in Covid infections in the first week of this month, while 16 of Punjab’s 22 districts have positivity rates over five per cent, which is the danger level.

UP has seen its active caseload spike to nearly 90,000, while Punjab, Goa, Manipur, and Uttarakhand have seen their active cases increase to over 60,000 between them.

Medical experts and civil society groups, as well as the Allahabad High Court had called for polls to be deferred, but the poll body said it was constitutionally bound hold elections in a “timely” manner.

Elections were held in Bengal, Assam, Tamil Nadu, Kerala and Puducherry this time last year, where many were without face masks as they attended rallies led by Prime Minister Narendra Modi, Bengal Chief Minister Mamata Banerjee and other political leaders, where social distancing was absent.

That was just before the devastating second wave hit India.

With memories of that in mind, concerns had been raised that campaign events could once again become super-spreaders, particularly with the Omicron variant now driving infections.

The first phase of Assembly elections this year will begin on February 10 and continue till March 7, with all five results due on March 10.

ReformerNews - January 27, 2022 0
<!-- -->The paraglider fell from parachute when the jeep pulling it got stuck in river sand. (Representational)Tinsukia: A 35-year-old tourist was killed when...

ReformerNews - January 27, 2022 0
<!-- -->The government credited wide vaccination coverage for the fall in number of deaths.New Delhi: Omicron is now the dominant variant of Covid-19...

ReformerNews - January 27, 2022 0
Protein powders are nutritional supplements that are getting more and more popular over the years. They come in different forms - the most...
© ReformerNews 2021. All Rights Reserved
Go to mobile version
%d bloggers like this: