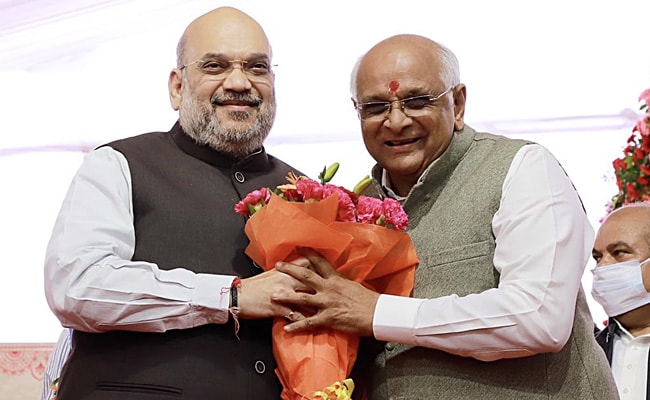 While leaving on Sunday morning for the BJP legislature party meeting where a new Chief Minister would be selected, Mr Patel made plans for an evening outing. His aides say he had lunch and left in the same clothes for the BJP meet. (A journalist revealed Mr Patel regretted not changing his kurta)

Out went his plans within moments, as he went from first-time MLA to Chief Minister of Gujarat, Prime Minister Narendra Modi’s home state.

Even as he joined the meeting, he walked into the hall practically unnoticed, not knowing that senior party leaders were already discussing him as a possible candidate to replace Vijay Rupani, who quit on Saturday.

The media had no whiff of the surprise candidate.

I was doing a live report for NDTV India and while I was also discussing the names being tossed around, I kept stressing what my source had told me – the name could be a surprise and it was likely to be someone from the Patel community.

But after that tip, my source had gone silent.

I ran into a former colleague who also confirmed the “surprise candidate” bit. Another reporter quipped, paraphrasing the popular saying: “We propose, Amit Shah disposes.”

On NDTV 24×7, Vishnu Som asked me what was going on. I spotted an old BJP face, someone who had been very helpful in the past. I asked him on camera if the party had a name. “In another 10 to 15 minutes,” he replied.

I reported that the MLAs inside were now aware of who was going to be the next Chief Minister of Gujarat.

Finally, we were told the man was Bhupendra Patel. That was a surprise indeed. I could not go on air with it without confirmation, even though another channel was already going to town with the name. I went back to the BJP leader I had been speaking to and asked him whether Bhupendra Patel had been picked. Most probably, he responded. That was all I needed.

Some channels had been on air with the information for about four to five minutes and in TV reporting, the race is nerve-wracking.

When my cameraman said the doors had opened, I made a dash for the meeting hall with him. We entered just as Narendra Singh Tomar announced that a name had been proposed by the outgoing Chief Minister and all the MLAs had unanimously decided on Bhupendra Patel as their new leader.

That’s when we really saw Mr Patel, who found it difficult to approach the dais as the media had completely blocked the stairs to the stage.

I visited Ghatlodiya, Mr Patel’s constituency, on Monday morning to get an insight into the new Chief Minister. As I spoke to his aides, I realized the extent of the secrecy the BJP had exercised in the hours leading to the announcement.

The entire operation was closely watched by Amit Shah as Bhupendra Yadav and BL Santosh set things in motion on Saturday with the resignation of Mr Rupani. Prime Minister Narendra Modi backed the choice.

Mr Patel has worked in the Ahmedabad Urban Development Authority and even the Ahmedabad Municipal Corporation. So though he is a first-time MLA, he has administrative experience and is definitely no political novice, say his aides.

Mr Patel’s Sunday plan to visit relatives is on hold for now.

He had also been planning to meet with the Chief Minister over some projects for his constituency, his close aide Rajesh Soni told me. He wouldn’t have imagined that he would end up becoming Chief Minister.

Officials and MLAs of the BJP say they haven’t seen this kind of secrecy before. But no one is surprised. There was never going to be any opposition to PM Modi and Amit Shah’s choice; the legislature party meet was mere formality.

Disclaimer: The opinions expressed within this article are the personal opinions of the author. The facts and opinions appearing in the article do not reflect the views of NDTV and NDTV does not assume any responsibility or liability for the same.

ReformerNews - September 17, 2021 0
<!-- -->Elon Musk is the founder and CEO of SpaceX, which launched its first all-civilian crew.Amazon and Blue Origin founder Jeff Bezos has...

ReformerNews - September 17, 2021 0
America's withdrawal of its troops from Afghanista, after 20 long years, have not gone down well among people in the country as well...

SpaceX Inspiration4 Launched Successfully: Here’s What the Crew Is Up To