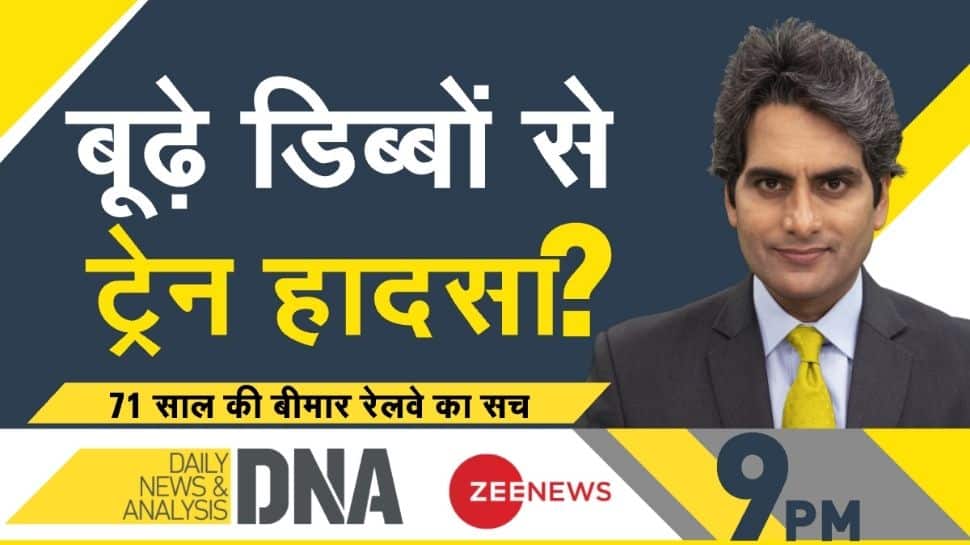 New Delhi: Have you ever wondered while travelling on a train how old is its engine or what is the condition of the tracks on which your train runs?

These questions crop up whenever there is a train-related accident anywhere in the country.

Zee News Editor-in-Chief Sudhir Chaudhary, in his prime time show DNA aired on Friday (January 14), sought to dig deeper into what’s ailing the Indian Railways and what are the main causes of rail accidents in the country.

As per the research, trains in India are still being operated with the British-era technology. But is it now time for the Indian Railways to tear up the ageing tracks and outdated technology?

The question became relevant once again after at least nine people were killed and over 40 others were injured when 12 coaches of the Bikaner-Guwahati Express train derailed near Domohani in West Bengal’s Jalpaiguri district on Thursday.

According to a preliminary report, the train driver tried to stop the train by applying the emergency brake after a technical fault in the engine.

In a worrying trend, India ranks at the top among those countries which witness incidents of train derailment almost every year in this way. The question that arises is why these are accidents not stopping?

Which implies that out of the total 67,000-kilometer, 54,000 kilometer of railway line belongs to the British era.

While new railway tracks are needed to run modern and fast-speed trains in any country, India has not been able to upgrade even its old railway tracks properly.

Due to these old tracks, the Railways carries out repair work almost every day, leading to delay in trains.

Secondly, there is also a risk of train accidents. More importantly, the modern trains are not able to run properly on these tracks in their full capacity as these ageing tracks affect the speed of these trains.

There has not been much development in this area in the last 70 years. Though India has more than 22,000 trains, the engines of most of these trains are either based on the old technology or have old coaches.

India continues to use the Integral Coach Factory (ICF) coaches which even countries like the Philippines stopped using in 2009.

Although India manufactures modern Linke Hofmann Busch (LHB) coaches developed by Germany at Kapurthala Coach Factory in Punjab, the work has been slow.

Unlike ICF coaches, LHB coaches do not come off tracks when the emergency brake is applied, and they can be driven at a speed of 200 km per hour, whereas ICF coaches can run at a maximum speed of 100 km per hour.

ReformerNews - January 22, 2022 0
Terraform Labs, the company behind the Terra blockchain has launched a non-profit organisation that the company likes to call Luna Foundation Guard...

ReformerNews - January 22, 2022 0
<!-- -->HighlightsKaran Johar is co-judging reality show Hunarbaaz In the latest promo of the show, he can be seen video calling his kids Parineeti...