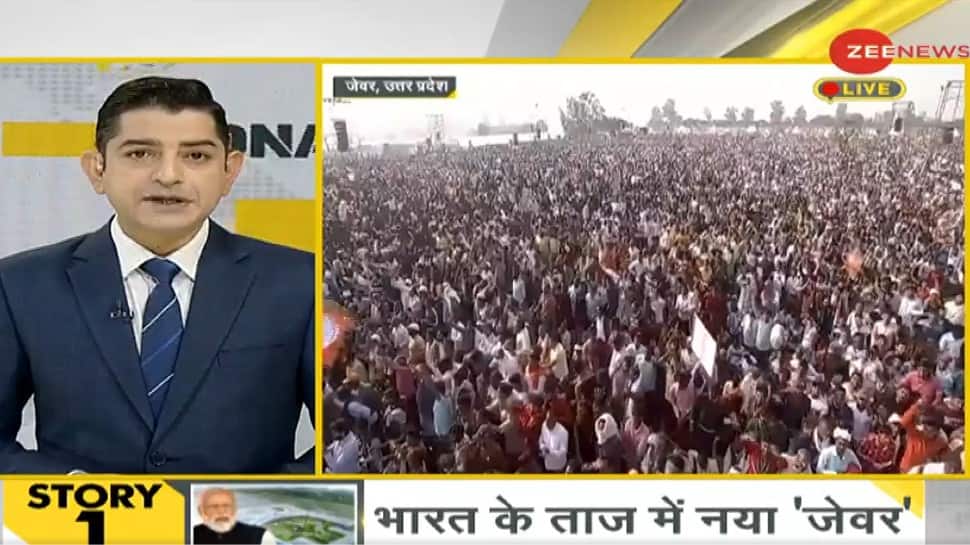 New Delhi: Prime Minister Narendra Modi laid the foundation stone of Noida International Airport, also called Jewar Airport, which will be the largest airport in Asia once completed. However, some political leaders are calling it pre-poll stunt in view of the UP elections.

Zee News Anchor Sachin Arora on Thursday (November 25) discussed if the airport foundation is just a means for landing votes or if it is meant for the “take-off” of development of UP and north India.

Some of the opposition leaders have said that the government’s move is aimed at gaining votes as it comes ahead months before UP polls.

However, it would be incorrect to link it with the elections. Here’s why:

This airport was first proposed 20 years ago in the year 2001. At that time there was a coalition government of BJP and Bahujan Samaj Party in Uttar Pradesh and the Chief Minister was Rajnath Singh, who is now Defence Minister in the Government of India.

When Mayawati became the Chief Minister in 2002, the proposal of the airport was sent to the then central government. However, nothing materialized in the last two decades. When Akhilesh Yadav was in power, the state government considered shifting the airport plan from Noida to Agra, to woo voters in western UP. But again, nothing happened. The question is whether it is right to link the airport, the plan of which has been for 20 years, to the elections. In India, even development work is seen through the political prism.

According to a study, on average, some kind of elections are held in India every 4 to 6 months, be it Lok Sabha, Vidhan Sabha, panchayat elections or Municipal Corporation elections. That is, the election machine keeps running non-stop in our country. Accordingly, any development project can be linked to elections.

Today, Samajwadi Party leader Akhilesh Yadav and Bahujan Samaj Party’s Mayawati are at the forefront of those who have declared Noida International Airport as an election announcement. But when these parties were in power in UP, thousands of schemes were laid before the assembly elections.

Before the 2017 Uttar Pradesh Legislative Assembly elections, former Chief Minister Akhilesh Yadav had laid the foundation stone of schemes worth Rs 60 thousand crore in just two months. But as the CM, he could start work on only a few of these schemes. In December 2016, he had laid the foundation of 910 projects before the elections, but on many of these projects, no work began while he stayed in the government.

It is true that every government lays the foundation stone of schemes worth thousands of crores before the elections to woo the voters. But it would be wrong to place Noida International Airport on this list because this project was not decided in a couple of months. Rather, it had to wait for two long decades. This airport will not just benefit Noida or UP. It is going to be the largest airport in the country that will serve crores of Indians.