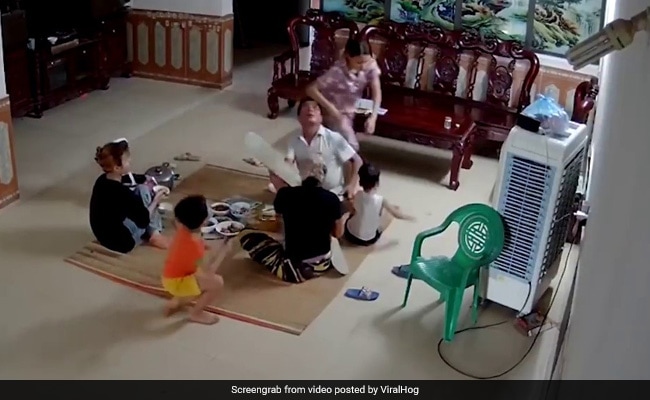 Social media users seem to have an insatiable appetite for the weird, the wonderful and the outlandish. Videos that capture the bizarre side of life often go viral on the Internet, with platforms like Twitter and Facebook only furthering their reach. From ceiling fans falling on unsuspecting people to teenagers taking on bears, there’s a number of surprising incidents that have been caught on camera across the world. Here is a look at 10 such jaw-dropping videos that capture the craziness:

Man Appears To Float Up Ladder

In this jaw-dropping video from Louisiana, USA, a construction worker appears to float up a ladder. A trick of the eye or clever editing? The jury is still out on that, but the video went viral with over 3 million views on YouTube since being shared earlier this month.

A group of people on a boat in Russia were shocked when a bear started swimming behind them, roaring menacingly. “We did not rush so that I could shoot a video, then we broke away from him and he remained swimming in the river,” the person filming the video explained.

A family in Vietnam narrowly escaped injuries when their ceiling fan fell down. Footage shows that they were sitting down for dinner when the fan fell right in their midst.

A dramatic video shows the moment a train struck a semi-truck carrying a load of vehicles near Thackerville, Oklahoma. The high-speed train crash sent vehicles flying into the air.

A hair-raising video shows a buffalo smashing a car’s side view mirror. The incident was caught on camera in Malaysia. “The car was parked inside the fence but the gate was open for delivery trucks, but the buffalo arrived first,” the rueful car owner said.

Tornado Turns Truck On Its Side

Dashcam footage shows the moment a tornado flipped a truck on its side in Pennsylvania, USA. Luckily, the driver escaped with minor injuries.

In a jaw-dropping display of athleticism, a woman was filmed performing stunts while doing a handstand. With her legs in the air, she walks down a moving ramp with practiced ease in this video from Texas.

A woman in Australia came face-to-face with a 10-foot python while shopping. “I was browsing Glenorie Woolworths when I turned to my left and the face of a 10-foot diamond python was about 20 cm from my face,” she said.

In a shocking clip that went massively viral in June, a 17-year-old in California pushed a bear off a fence to save her dogs. In the hair-raising video, the huge brown bear was seen swiping at one of her dogs, who ran back after receiving a particularly hard blow.

And finally, to end things on a lighter note, a lesson in why you should always hold on tight to your balloons. Hilarious footage shows the moment a cash gift of $250, attached to a balloon, floated away from the birthday girl.

Viral Video Of Runaway Luggage At Airport Has Internet In Stitches

ReformerNews - December 7, 2021 0
<!-- -->The missile has an operational range of 50 to 60 km, said DRDO.Balasore: India on Tuesday successfully flight tested the indigenously developed...
© ReformerNews 2021. All Rights Reserved
Go to mobile version
%d bloggers like this: