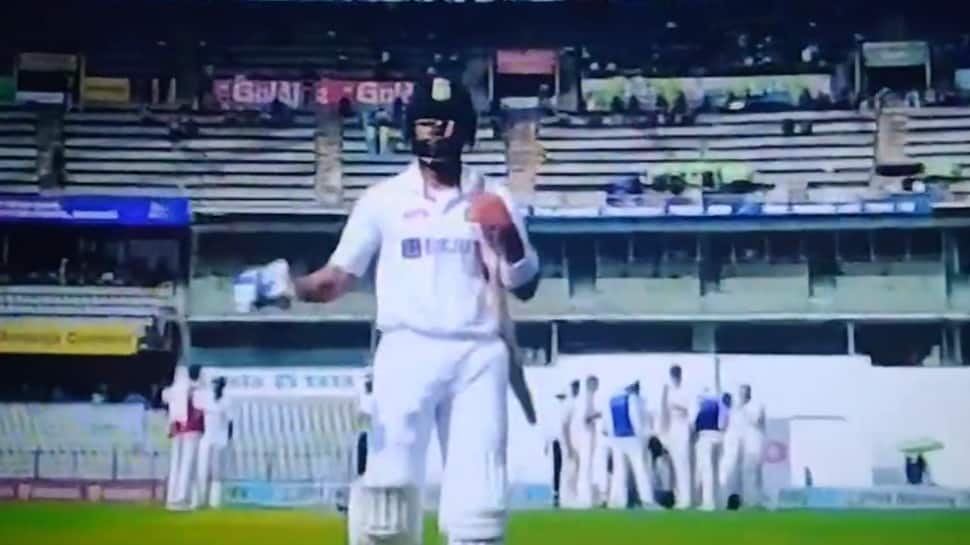 India captain Virat Kohli`s return to Test cricket wasn`t a happy one as he got out for a four-ball duck in the ongoing second Test against New Zealand at the Wankhede Stadium in Mumbai on Friday.

Kohli failed to open his account and was adjudged lbw while pressing forward to push off left-arm spinner Ajaz Patel`s bowling in the 30th over.

The Indian skipper decided to take the Decision Review System (DRS) but the third umpire Virender Sharma found no conclusive evidence to overturn the on-field decision with the ball hitting the bat and pad at the same time.

Sharma saw the replays from various angles before moving towards the ball-tracking, which showed three reds.

After Sharma asked on-field umpire Anil Chaudhary to stick to the original decision, Kohli had a word with umpire Nitin Menon before walking back to the dressing room in disbelief. Kohli was also seen slamming the advertising hoard on the boundary rope with his bat angrily as Patel completed a double-wicket maiden in the over, dismissing both Kohli and Cheteshwar Pujara for ducks.

After returning to the dressing room, the camera panned towards a shell-shocked Kohli, who reacted animatedly while watching the replay of his dismissal on the TV screen.

He brought out an amused reaction and was seen discussing the same with head coach Rahul Dravid before finally heading inside the room. Kohli`s dismissal has sparked a debate on social media on how he was given out on inconclusive evidence.

Kohli had returned to lead India in the second Test with fast bowler Mohammed Siraj and spin-bowling all-rounder Jayant Yadav the other forced changes for an injured trio of Ajinkya Rahane, Ishant Sharma and Ravindra Jadeja.

Watch Kohli going back to dressing room unhappy with the umpire’s decision: