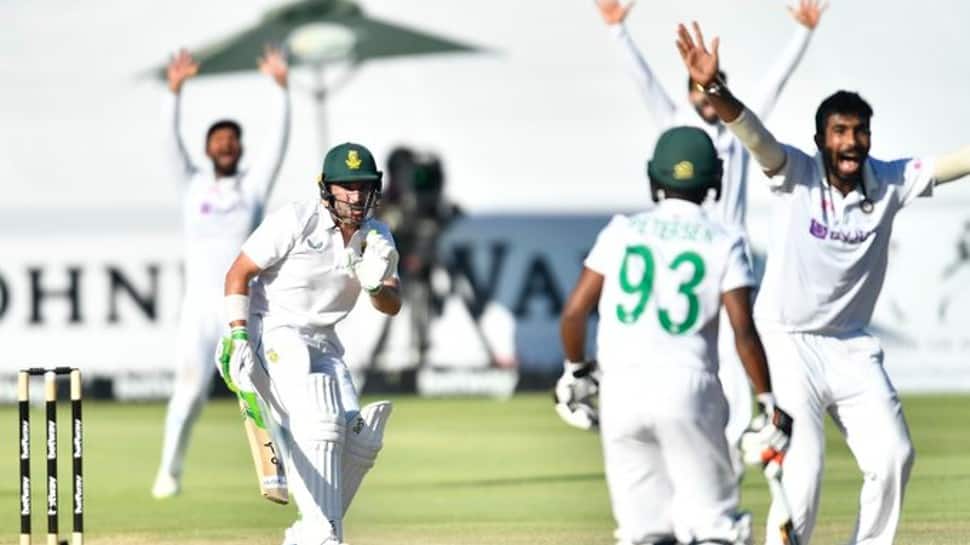 A South African team going through one of its toughest transition phase embarrassed a star-studded Indian team with a clinical seven-wicket victory in the third Test to clinch a memorable 2-1 series triumph on Friday (January 14).

The target of 212 wasn’t a tough ask and starting the day at 101 for two, young pretender Keegan Petersen (82, 113 balls) along with Rassie van Der Dussen (41 not out) added 54 runs for the third wicket to seal the match before Temba Bavuma (32 not out) helped in putting the final touches. Petersen walked away with both the player of the match as well as player of the series honours.

Bavuma and van der Dussen take them over the line!

A terrific victory for a young team – what a performance!

Sunil Gavaskar termed it as a “Nightmare for India” as they were not even close to competing in the last two Tests and Dean Elgar’s ear to ear grin and the bear hugs that he shared with his teammates said it all. It was especially sweet for the hosts who lost premier pacer Anrich Nortje to injury before the series and were then hit by Quinton de Kock’s sudden mid-series retirement.

The Indian team, meanwhile, lost it in their mind after the contentious DRS review of Elgar that went wrong on Thursday and their focus on using stump microphone more to take digs at broadcaster Supersport instead of focussing on getting Petersen out spelt their doom. “It’s a great spectacle of Tests for everyone to watch; hard-fought series. Great first game but SA did amazingly well. In both Tests they won, they were clinical with the ball in crunch moments,” India skipper Virat Kohli admitted after the game.

With this series defeat, India’s record of never having won a Test series in the Rainbow Nation for three decades, remained intact. Mahendra Singh Dhoni is the only India captain to have managed a drawn series back in 2010. It was one of the strongest Indian teams on paper against one of the weakest South African teams on paper.

However, the operative word here was “on paper” as Elgar’s unheralded bunch showed a lot of character in punching above their weight and also getting heavily rewarded for their relentless efforts. “The way our bowling unit delivered throughout the series is brilliant. I threw down the challenge after the first game and the guys responded brilliantly,” said an elated Elgar.

The mindless chatter and incessant sledging didn’t bother the likes of Petersen and Van der Dussen as they went about their job in a thoroughly professional manner. India’s batters were far too dependant on bowlers to bail them out for the past few years but this series showed that this attack is human too even though they put their best foot forward, which wasn’t complemented at all by the willow wielders.

The only hope for India was the first spell from Jasprit Bumrah and Mohammed Shami in sultry conditions with the semi-new ball and they did their bit with all sincerity. Petersen was beaten time and again but, in between, scored his runs to keep the scoreboard ticking. Their strategy was to see off the first spell and capitalise when Umesh Yadav, who is known to bowl boundary balls, was brought into the attack.

Bumrah, in his second spell, did get one to straighten but Cheteshwar Pujara, enduring a poor series with the bat, dropped a crucial regulation slip catch with the batter on 59. If one remembers, it was Ross Taylor, who had got a ‘life’ when Pujara dropped a sitter during World Test Championship final and the bowler at the receiving was again, Bumrah. It was Shardul Thakur who finally had the young man played on but by then Petersen had ensured a series win for his team.

It needs to be put as it is. India did not lose the Test because of one DRS that went wrong but for the consistent poor batting throughout the series save the first innings of the first Test. The scores of 202, 223 and 198 is the reason India lost and the second innings effort at both Wanderers and Newlands showed that Indian bowlers could only do as much. The heavy duty tirade against the host broadcasters Supersport with their customised diatribe did not look good in the face of a dismal performance.

The skipper himself led the attack and it seemed like a forceful way of trying to put the blame squarely on technology that “may or may not have gone wrong”. The die-hard Kohli fans believe that the Indian skipper needs a narrative to spur him on and his favourite script is “he and his team against the entire world” as his deputy for the series KL Rahul would have fans believe on the stump-mic.

It’s far from truth but it works well for him to push the envelope. Van der Dussen was subjected to intense sledging on the fourth morning and so was Petersen but they remained unfazed. Once Bavuma started hitting those boundaries, the strokes did the answering. But Kohli losing his counsel and blowing his top was also a projection of a man who is under immense pressure and a Test defeat against a much lower-ranked side which had been grappling with all kinds of socio-political issues over the past few years, isn’t going to go down well with the BCCI.

In any case, Kohli’s personal relationship with the BCCI brass is at its lowest erb, and this loss might just have consequences. To be fair, Kohli didn’t lead the side badly in the two Tests that he led but being good isn’t enough if it’s not winning the side the series. He is the only captain who has now lost two Test series in South Africa. But a lot has got to do with how India have persisted with two completely out of sorts middle-order players.

Cheteshwar Pujara and Ajinkya Rahane are no longer bringing any value to the team and they are unlikely to retain their places in the time to come. Yes, the transition phase ought to start and it better be soon.