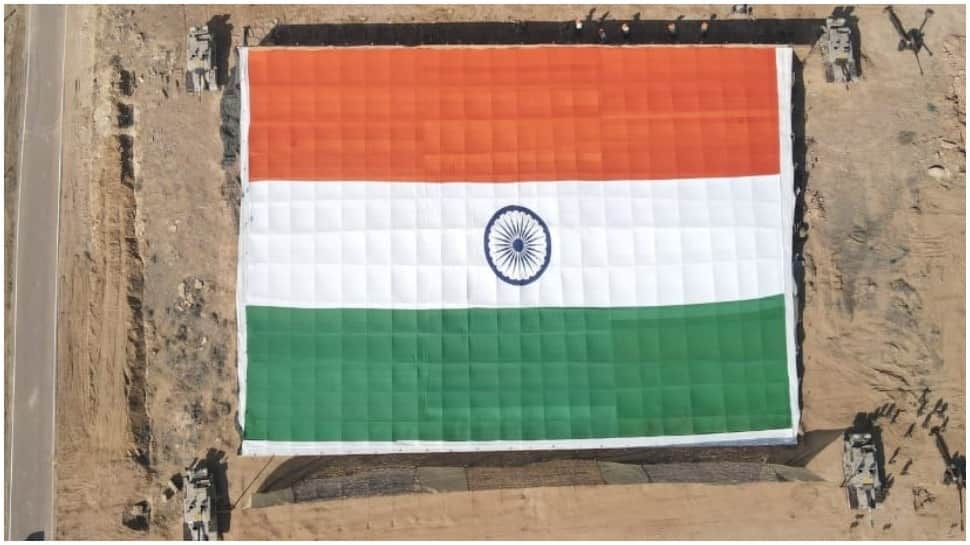 Jaisalmer: As a part of 74th Army Day celebrations, `Monumental National Flag,` the world`s largest national flag made from Khadi, was displayed along the India-Pakistan border in Rajasthan`s Longewala on Saturday. Longewala was the center stage of the battle between India and Pakistan in 1971.

The Southern Command unveiled the flag of size 225 feet by 150 feet at Jaisalmer Military Station. A whopping 4500 meters of hand-spun, hand-woven Khadi cotton bunting has been used in making the flag which covers a total area of 33, 750 square feet.

The Ashok Chakra in the flag measures a diameter of 30 feet. It weighs approximately 1,400 kg. Manufactured by Khadi Dyers and Printers, the flag is a “befitting tribute to the Indian heritage” as it is made of hundred per cent Khadi material, the Army said in an official statement.

The hoisting of the flag also commemorates the 75th year of India`s independence being celebrated as `Azadi Ka Amrit Mahotsav`. GOC 12 RAPID unveiled the national flag amidst select dignitaries, who were amongst those present.

The `Monumental National Flag` has been prominently displayed and is clearly visible from a distance of several kilometers. Army said that this monumental flag showcases the “pride and aspiration of people of our country with an aim to knit all citizens in support of glory and spirit of nationalism.”

The flag hoisting was followed by national anthem and military band display. This initiative of Army to inculcate patriotic fervor amongst citizens in the border region is being widely appreciated.

According to the Ministry of micro, small and medium enterprises, this is the fifth public display of the national flag since its unveiling in Leh on October 2, 2021. It was, later on, displayed at Hindon Airbase on the occasion of Air Force Day on October 8, 2021 and at the Red Fort on October 21, 2021, that marked the completion of 100 crore COVID-19 vaccinations in India.

On December 4, 2021, the national flag was displayed at the Naval Dockyard near Gateway of India in Mumbai to celebrate Navy Day.

Girl, 10, Pushed Into Well By Man Who Tried To Rape Her. She Survived: Cops

ReformerNews - January 16, 2022 0
<!-- -->The BJP has removed Harak Singh Rawat, accusing him of anti-party activities.Just weeks ahead of the Uttarakhand assembly elections, the BJP on...

ReformerNews - January 16, 2022 0
Novak Djokovic grew up with NATO bombs raining down on Serbia but emerged to become one of the greatest tennis players of all...

ReformerNews - January 16, 2022 0
Bollywood actress Mouni Roy, who is known for her dancing skills, has been roped in as a judge for the upcoming season of...
© ReformerNews 2021. All Rights Reserved
Go to mobile version
%d bloggers like this: