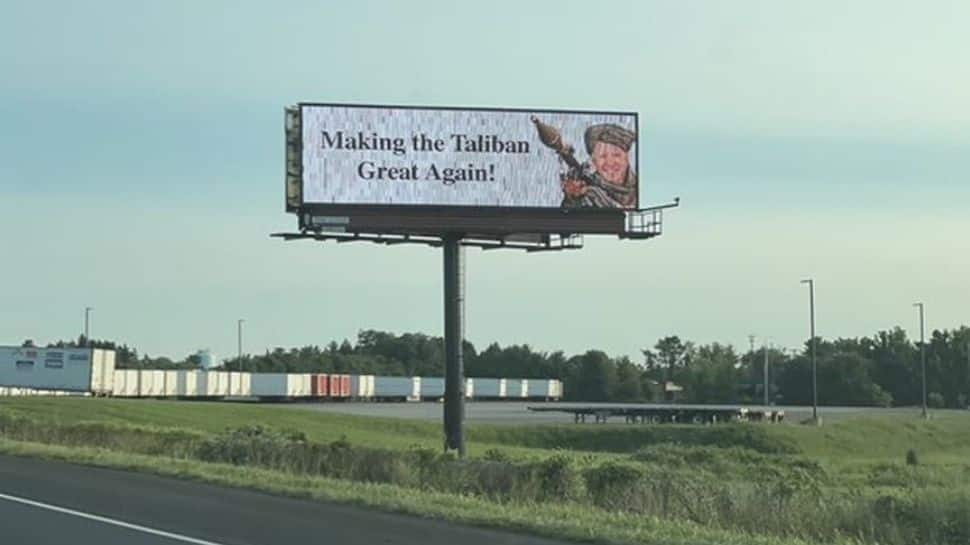 America’s withdrawal of its troops from Afghanista, after 20 long years, have not gone down well among people in the country as well as across the globe. The nature of “hurried exit” has been the cause of the chaos and humanitarian crisis in Afghanistan, many have claimed. And now as proof of this disappointment against its President Joe Biden,  a bunch of billboards have reportedly come up across Pennsylvania, which shows Biden as a Taliban terrorist, with an accompanying slogan –  “Making the Taliban great again”!

According to news reports, a former Pennsylvania state senator, Scott Wagner, also a Republican, is the brains behing these banners. Wagner reportedly rented out a dozen billboards across highways at a cost of about $15,000 to express his anger and that of his country men.

A billboard has popped up along I-83 in York County, Pennsylvania, showing President Joe Biden in a military outfit with the phrase “Making the Taliban Great Again.” Here’s who put it up. https://t.co/C3rBY1B33M pic.twitter.com/krhceWrh4x

“The pull out rushed through by President Biden had made us the laughing stock of the world,” Wagner has reportedly told local media house, Fox News, in an email, reports Wion. “The Taliban are openly stating that they ran the United States out of Afghanistan – they are now very emboldened.”

Wagner said that he was sad and worried that Afghans will now be deprived of the freedom they enjoyed since America landed in Afghanistan. He also expressed worry about the war veterans. While running for governor of Pennsylvania in 2018, Wagner had met several veterans.

Also read: France accuses US of back-stabbing as huge submarine deal with Australia falls through

“What do you say to those veterans (who fought in the Afghanistan war)?” Wagner told the York Daily Record, reflecting on the pullout of US troops in Afghanistan. “It’s like Vietnam, even worse.”

Wagner has also reportedly said that these billboards will not be taken down anytime soon and will be on display for at least two months.

Parkland High School Shooter Pleads Guilty To Killing 17 In Us