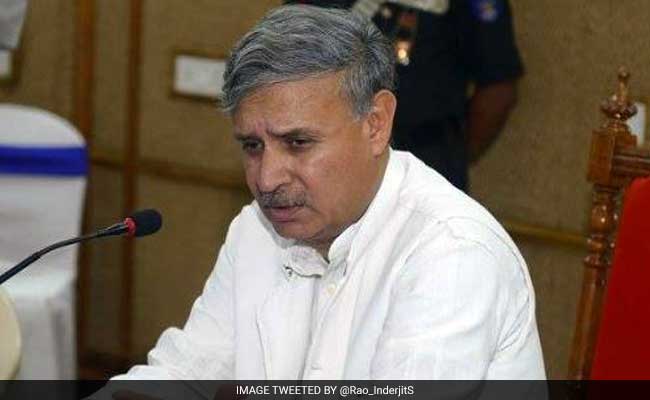 “We have to think whether we would be able to hold on to those 45 seats,” said Rao Inderjit Singh.

The BJP cannot depend on winning Haryana for a third time on Prime Minister Narendra Modi’s name alone, Union minster Rao Inderjit Singh has apparently said at an internal meeting of the party.

A video from the meeting shows the junior minister of Planning and Corporate Affairs saying, “Narendra Modi’s blessing is on us. On our state… but there is no guarantee that his name alone will fetch us votes. It would be our intention that they (the voters) vote in the name of Modi. But it depends on the BJP workers, who are at the ground level, to ensure that the votes are cast”.

Referring to the BJP’s huge victory in the 2014 general elections, he said: “We agree that the (BJP) could form the government at the Centre because of Modi ji. It had a cascading effect on states… Even in Haryana where the government could be formed for the first time. And it happened the second time too… but it is usually the case that another party gets a chance”.

The BJP, he said, got 47 of the 90 assembly seats in Haryana the first time and 40 seats the second time, amending that it was normal for the victory margin to be lower in such cases.

“But whether we would be able to hold on to those 45 seats we have to think about,” he told the party workers and senior leaders attending the meet.

Assembly elections are due in Haryana in 2024, when the Manohar Lal Khattar government will seek mandate for the third time.

Over the last year, the government has landed in multiple controversies for its use of force on farmers protesting against the Centre’s new farm laws.

The last instance of this was on August 28, when Haryana police lathicharged farmers who blocked a highway while on way to Karnal to protest against a BJP meeting attended by Chief Minister. Around 10 people were injured.

The repercussions carried on well into September, with furious farmers demanding action against Ayush Sinha – an IAS officer seen directing the police to “break the heads” of farmers.

Mr Khattar, who had defended the officer, has been accused by the opposition Congress of “instigating BJP supporters to attack protesting farmers” after a video of him calling for volunteer groups to administer “tit for tat” treatment, was circulated on social media.

The Chief Minister’s Office said the statement has been “spread after cutting it in half”.