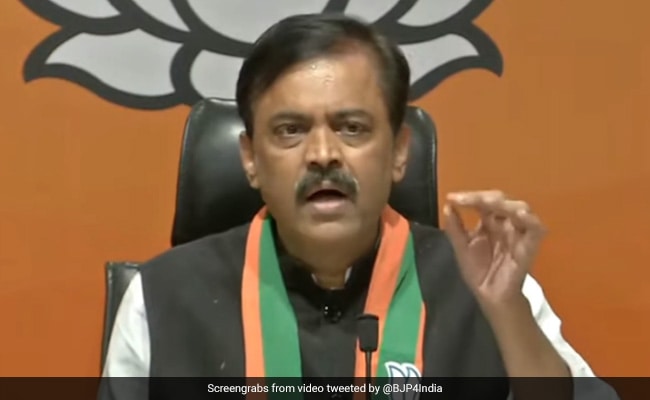 “Our stand is that Andhra Pradesh should get rid of both TDP and YSR Congress party,” the BJP said.

Amid reports of TDP supremo N Chandrababu Naidu exploring the possibility of an alliance with the BJP, the ruling party at the Centre on Wednesday said there is no question of alliance with the Andhra Pradesh based party, and that the state needs to get rid of both regional parties.

The BJP also launched a scathing attack on YSR Congress over alleged abduction of its leader, saying that the ruling party in Andhra Pradesh has been threatening people to ensure its victory in Badvel assembly bypoll.

Addressing a press conference at the BJP headquarters here, BJP leader GVL Narasimha Rao and its national secretary and co-incharge of Andhra Pradesh, Sunil Deodhar said a party leader was abducted and forcefully inducted into the YSR Congress ahead of the assembly bypoll.

“This time, the YSR Congress leaders are following the Bengal model and threatening people along with government employees during the election campaign that if they do not vote for YSR Congress, they will not get the benefits of government schemes,” Mr Deodhar alleged.

Due to the corrupt government of Jaganmohan Reddy, the atmosphere in the state is against the government, he said.

“The government of Andhra Pradesh is trying to replicate the Mamata Banerjee model of governance. The state government is supporting Christanity and conversions in the state,” he said.

“There is no question of alliance with the TDP. BJP and Jan Sena will contest all forthcoming elections together. Our stand is that Andhra Pradesh should get rid of both TDP and YSR Congress party,” he said.

It has been reported that Mr Naidu, who was recently on a trip to the national capital, had expressed that he was exploring the possibility of alliance with the BJP so that “others do not exploit him”.

TDP in alliance with the BJP and Jan Sena had contested 2014 general and assembly elections in Andhra Pradesh, but later parted ways with the BJP ahead of 2019 elections on the issue of special status for the state.

Kerala Hit By Foreign Tourist Cancellations Despite No Omicron Cases

ReformerNews - December 7, 2021 0
<!-- -->There's hope that campuses will continue to have the presence of students. RepresentationalBengaluru: Students are back on Karnataka campuses - but so...

3 Children Burnt To Death In UP Amid Sleep As Pile...

ReformerNews - December 7, 2021 0
<!-- -->Mirzapur: Police and administrative officials are investigating the matter. (File)Mirzapur (UP): Two sisters and a brother, aged three to seven-years, were burnt...
© ReformerNews 2021. All Rights Reserved
Go to mobile version
%d bloggers like this: