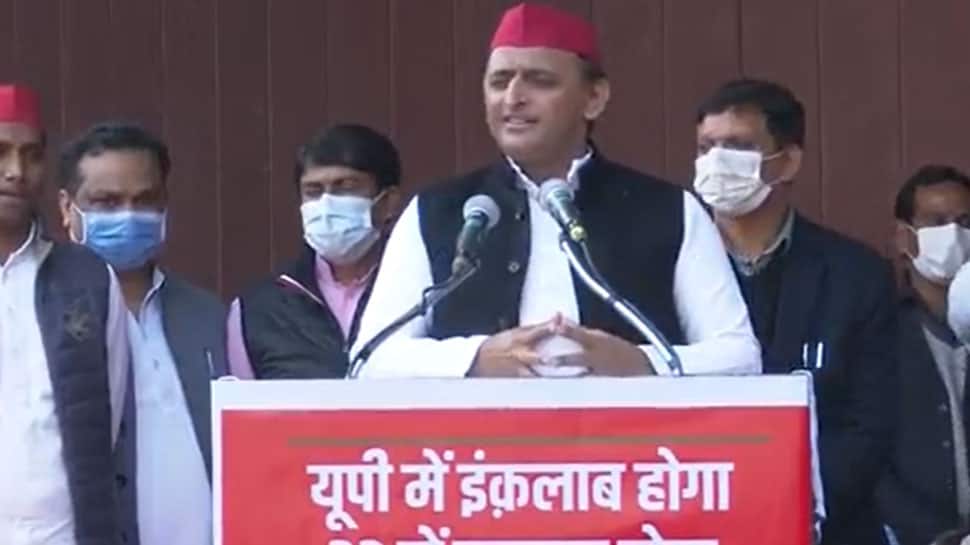 Lucknow: Elated over the induction of several BJ ministers into his party fold just days ahead of crucial assembly polls, Samajwadi Party president Akhilesh Yadav on Friday said that the ruling party will just get 3-4 seats in this year’s elections.

Taking a swipe at Chief Minister Yogi Adityanath, the SP chief said, “By the “80 versus 20” assertion, CM meant that the BJP will get 20 per cent of total seats in the Uttar Pradesh in this elections while the rest 80 per cent will go to his party.”

“Baba mukhya mantri (Adityanath) should engage a math teacher,” the SP president said, referring to the chief minister’s “80 vs 20” remarks.

#WATCH BJP wickets falling one after the other, although our CM does not know how to play cricket. As Swami Prasad Maurya said wherever he goes, the government is formed, even this time he brought a huge number of leaders along with him: Samajwadi Party chief Akhilesh Yadav pic.twitter.com/DeLp2Zbdfe

Adityanath had recently said that in the Uttar Pradesh elections, while 80 per cent supporters will be on one side, 20 per cent will be on the other, which many believed was alluding to the 20 per cent Muslim population in the state.

Yadav also pooh-poohed the BJP’s claim of winning three-fourth seats in the 403-member Uttar Pradesh Assembly, saying, “they meant they will win three or four seats.”

However, in a big jolt to the ruling party, former BJP ministers Swami Prasad Maurya and Dharam Singh Saini along with other MLAs, formally joined the Samajwadi Party on Friday along with their supporters.

Maurya accused the BJP of coming to power in 2017 by duping backward castes. He said that the BJP had projected Keshav Maurya as chief minister, but then brought `someone else from Gorakhpur like a Skylab`.

Maurya said that all his efforts would be to free Uttar Pradesh from the misrule of the BJP. He said that the Yogi Adityanath government has misled the people of the state.

“I want to tell the BJP that its countdown to failure begins today,” he said. Samajwadi Party president Akhilesh Yadav, while welcoming the leaders into his party, said that the BJP was robbing the poor to give benefit to the rich.

Taking a dig at Deputy Chief Minister Keshav Maurya, he said, “Now that these leaders have come here, I wonder what will happen to those who are made to sit on stools.”

He also said that worried over the fact that so many leaders were joining the SP, Yogi Adityanath had already left for Gorakhpur even though he was supposed to return on March 10.

Meanwhile, former minister Dara Singh Chauhan did not formally join the Samajwadi Party on Friday. Sources said that Chauhan, along with some more legislators, will join on Sunday.

ReformerNews - January 22, 2022 0
<!-- -->On being alerted, the fire brigade personnel and police rushed the spot.Two people have died after a major fire broke out inside...