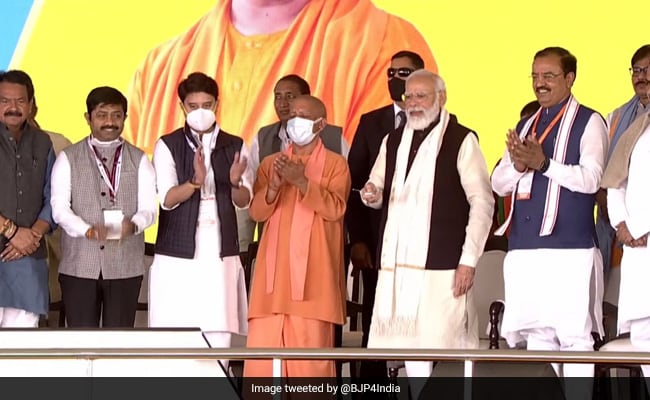 Prime Minister Narendra Modi on Thursday laid the foundation stone for the Noida International Airport – being built near Jewar in Uttar Pradesh’s Gautam Buddh Nagar district – which he said would become the “logistics gateway of northern India”.

The new airport – UP’s tenth (and fifth international, the most of any state) – will “put Noida and western UP on the global map”, the Prime Minister declared at his first public event in the region since he said the farm laws that have triggered furious nationwide protests will be scrapped.

Many protesting farmers come from western UP and the state is set to hold elections next year.

“Congratulations to the people of Uttar Pradesh for the ground-breaking of the Noida International Airport. It will put Noida and western UP on the global map. The Noida airport will be the “logistics gateway of northern India”, the Prime Minister told a crowd of thousands.

“Today, 21st century India is seeing one mega infrastructure project after another. These do not just have a direct impact on the local population… but also transforms the entire region,” the Prime Minister said, as he pitched work on the Noida airport and those in Kushinagar (inaugurated by him last month) and the proposed Ayodhya airport.

With one eye on the farmers protest, the Prime Minister said the Noida airport would help them export their vegetables, fruits and produce directly to the world.

“There was a time… till not so long ago… when people wondered if UP can progress. But today, UP is seeing unparalleled progress. From expressways to airports and rail projects, all is happening here in UP now. It is not just making an impact in India, but is leaving an impression globally,” he declared.

The Prime Minister also took swipes at the opposition ahead of next year’s UP election and the 2024 Lok Sabha election, declaring: “So many projects in UP shelved by previous governments because. This too was suggested to be shelved… but then came the BJP’s double-engine government (the BJP in power at the state and centre) and development picked up. For us, developing India is politics.”

The PM also commented on land acquisition for the airport, saying: “We used to see many projects where land was taken from farmers, and neither were they compensated properly nor did the projects kick-off. We take all our decisions keeping in mind India’s progress, farmers’ betterment, project and regional betterment.”

Ahead of the Prime Minister’s visit, the airport ran into controversy over protests from farmers whose lands had been acquired. They have camped in tents barely 700 metres from the airport, and have said that they were either not paid or not given alternative houses, as promised.

A local BJP MLA admitted land had been acquired in a hurry.

Fully operational, the Noida International Airport is expected to serve around 1.2 crore passengers per year, with Delhi, Noida, Ghaziabad, Agra, Faridabad, and nearby areas set to benefit.

It will also decongest traffic in and around IGI airport, the centre has said.

Connectivity will be handled by a “multimodal transit hub” with metro and high-speed rail, as well as taxi and bus, services, the Prime Minister said, as he listed plans for major roads and expressways linking the airport.