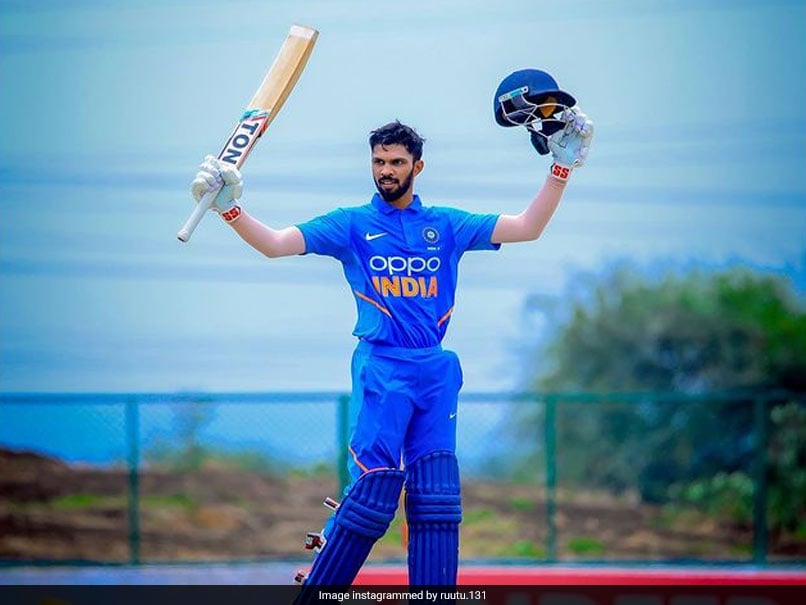 Overwhelmed by emotion after getting his maiden India call-up, batsman Ruturaj Gaikwad of Friday said he would be banking on his ability to adapt quickly when he tries to make an impression during the upcoming tour of Sri Lanka. The 24-year-old from Maharashtra is one of the six uncapped players named in the 20-member squad for the limited-overs series against Sri Lanka next month. The Shikhar Dhawan-led side will play three ODIs and three T-20 matches between July 13 and July 25.

“I am just happy. Right from the moment I got to know about it, you know a journey comes in front of your eyes that from where you started and where you wanted to reach…it’s a pretty emotional feeling,” Gaikwad told PTI after his net practice session near Pune.

The right-hander averages over 47 in the 59 List A matches that he has played and has a strike rate of more than 130 in the T20 format.

Gaikwad feels adapting to any situation in the game is his “core strength”.

“…be it in an attacking manner or be it playing according to situation, taking some time or making sure your team crosses the line, the way I adapt to both situations, that is what I think my strength is more often,” he asserted.

The youngster, who rose to prominence after his successful stint with IPL team Chennai Super Kings, said he is looking to reconnect with Rahul Dravid, who would be head coach of the team.

Dravid has, in the past, coached the Indian under-19 and A teams.

“The opportunities would be limited but I’m just looking forward to learn from this journey as much as I can. There are experienced players in the group and obviously once again I will get a chance to reconnect with Rahul Sir,” he said.

“The last India A tour happened one and half years ago, so again, there is a chance to regroup with him (Rahul Dravid) have a chat about the game, so there is lot more than just performance or scorecard.

“Obviously if I get opportunity, just hoping that I can give my best and wish to win a game for India. One of my biggest goals is to get a win for the Indian team or my country.”

Gaikwad has shared the dressing room with the likes of Faf du Plessis and Mahendra Singh Dhoni in CSK and he believes that he has learnt several things from the duo.

“I think with Mahi Bhai, obviously whatever he speaks it is always eye-catching and I had heard that he spoke about me in the post-match presentation and all, I don’t talk much with him, he knows that I’m a quiet and shy guy,” he said.

“When he (Dhoni) thinks I’m under the pump or pressure, he is first one to come and ask me that ‘are you feeling something like that and you need not worry’,” he recalled.

“Even last year there was a situation, where I started badly in IPL, so he was the one who came up first and asked me to relax and enjoy the game…it calmed my nerves a little bit and it helped me enjoy my game.

“There are lot of inputs he has given me throughout and they have not just helped in cricket but also helped me in life,” he said.

Gaikwad joins the illustrious list of Maharashtra cricketers like Chandu Borde and Kedar Jadhav, who have played for India.

He said that Jadhav has played an influential role in his journey.

“Kedar (Jadhav) was with me from the start of my journey, from the time my first-class career started and I think he has been very influential right throughout the journey…he was always been encouraging me.”

ReformerNews - June 18, 2021 0
The gallery in Shanghai pulls the video piece "Uglier and Uglier" after a backlash. Source link BBCNews