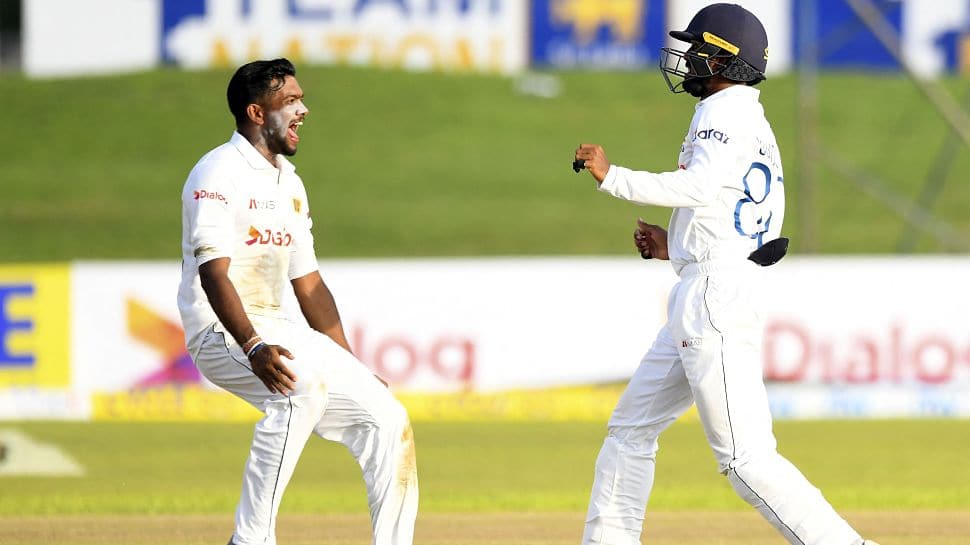 Galle: Sri Lanka completely dominated the proceedings on Day 4 and the hosts are just four wickets away from registering a victory against West Indies in the ongoing first Test here at the Galle International Stadium.

At stumps, West Indies score read 52/6 — still needing 296 runs for the win. For the visitors, Joshua Da Silva (15) and Nkrumah Bonner (18) are unbeaten at the crease.Chasing 348, West Indies got off to the most horrendous start possible after being reduced to 18/6 in the 12th over.

Ramesh Mendis wreaked havoc as he dismissed visitors top-order and West Indies was looking completely down and out.

Joshua Da Silva and Nkrumah Bonner then revived the innings for Windies and both batters grinded it out in the middle. Bad light forced an early end to Day 4 and the hosts are just four wickets away from victory.

Earlier, after gaining a lead of 156, Sri Lanka got off to a bad start as Pathum Nissanka (3) departed cheaply off the bowling of Rahkeem Cornwall.

Oshada Fernando (14) also did not manage to stay at the crease for a long haul, but Dimuth Karunaratne and Angelo Mathews took Sri Lanka to the lunch interval and the hosts had eight wickets in hand, with the lead extended to 240.Karunaratne went on to score 83 while Mathews remained unbeaten on 69 as Sri Lanka declared their innings at 191/4, setting West Indies a target of 348.

Earlier, resuming Day 4 at 224/9, overnight batters Joshua Da Silva and Shannon Gabriel did not manage to stay at the crease for a long haul as the latter was dismissed by Praveen Jayawickrama, and Windies innings folded for 230, giving hosts a lead of 156 runs.

ReformerNews - December 6, 2021 0
<!-- -->Vaccine mandates in the US have generally been issued by cities or states (File)New York: New York Mayor Bill de Blasio on...