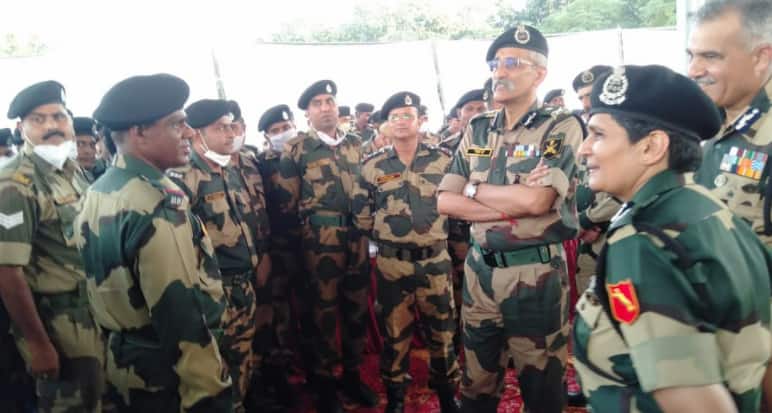 New Delhi: With the Taliban seizing control of Afghanistan, the security agencies here are apprehensive of a surge in the incidents of both surface and aerial infiltration from across the border into the Indian territory.

The top commanders of India’s first line of defence- Border Security Force (BSF)- have rushed to the forward areas of Indo Pak international border in Punjab to review the situation and fortify the borders to prevent any temerarious attempts in the future even as the incidents of violation of Indian airspace by the Unmanned Aerial Vehicles (UAV) flying from Pakistan’s soil have increased in recent past.

Since August 15 when the Taliban took control of Afghanistan there have been over five incidents of violation of Indian airspace in the Gurdaspur sector alone which has triggered the panic button prompting the BSF to take stock of the situation and not only strengthen its presence at the nearly 553 kilometres of international border with Pakistan in Punjab but also put in place the high-end surveillance systems.

According to sources, there have been a total of sixteen incidents of drone infiltration in the Gurdaspur sector alone during the current year. In few attempts, Pak drones have been successful in airdropping the arms, ammunition, and drugs too.

On the night of  October  5, there have been three incidents of sighting of drones in the Gurdaspur sector of BSF. Two drones were spotted simultaneously in the area of responsibility of  Bohar Vadala and Kashyam Barman Border out Posts (BoP) of BSF while another drone was sighted in the area of Chauntra BoP.

ISI-backed Pakistan militant groups have always been trying to find chinks on the international border in Punjab to infiltrate into India and cause havoc informed sources.

It is believed that the Pak ‘fidayeens’ suicide bombers who had sneaked into Indian territory to carry out pre-dawn attacks at Dinanagar police station and Pathankot Air Force station on July 27, 2015, and January 2, 2016, respectively had infiltrated into India via the Gurdaspur sector.

In 2019 drones originating from Pakistan had dropped weapons in Punjab’s border district Tarn Taran villages. In December 2020 Pak drones had ‘successfully’ dropped 11 Austrian made hand grenades, 1 AK 47 rifle, and ammunition in the border villages of Gurdaspur.

During his two-day visit to Punjab in the recent past, the BSF Director General Pankaj Kumar Singh visited the border areas under the Gurdaspur sector and reviewed the domination and operational preparedness on the ground.

After being briefed by the operational commanders, the BSF DG  also gave suitable directions to further strengthen the domination.

ReformerNews - October 25, 2021 0
PhonePe users have taken to social media to express disappointment over processing fee on mobile recharges above Rs. 50. The company has confirmed...
© ReformerNews 2021. All Rights Reserved
Go to mobile version
%d bloggers like this: